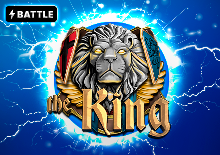 4/5 (780)
All hail The King! This regal slot machine by Endorphina will take you deep into a medieval kingdom to the sovereign court, where you will come across many fine riches and objects of power displayed on the 5 reels. There are 10 paylines to play with and the top jackpot will reward spinners with the princely sum of 900,000 golden coins. Helping you get your hands on the crown are a few extra gameplay features such as a free games and a wild symbols, both of which include multiplied wins.

This isn't the first slot machine to take on the theme of a medieval monarchy, and it certainly won't be the last. So how does this game stack up against the others? Well, visually speaking, The King is up there with the best of them.

The reel symbols themselves are colorful and intriguing, showing an array of fine weaponry and armor such as a shield with crossed swords, a golden gilded helmet and a magnificent dagger plunged into a pile of treasure. Other items of interest are symbols representing the royal crest, which is a fierce and brave lion as well as the King's crown itself. Guarding these irreplaceable regal heirlooms are two King's Guards – a male brute wielding a longsword and female archer. Find matching guard symbols and you will see them jump into action thanks to some snazzy animations.

Try out The King from Endorphina and you will be blown away by the coolness of this game!