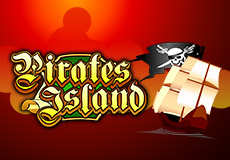 4/5 (531)
Swash your buckles and fare the seven seas with this pirate themed slot machine by iSoftBet. With 5 reels and 5 paylines, Pirates Island video slot takes spinning pirates on shore to explore an desert island in search of buried treasures. The biggest bounty on offer in the game is a 5,000x line bet multiplier which is not a bad return at all, especially considering that there are some hefty wagers available to be placed.
Pirates Island is one in a long line of online slot machines which take on a swashbuckling pirate theme, so it has a lot of competition to contend with. The theme is perhaps so popular thanks to the modern obsession with pirates in certain film franchises and television series, but the pirate of today's popular culture can be traced back to one of the original tales of “buccaneers and buried gold” - that is, of course, R. L. Stevenson's novel, Treasure Island.
This slot is full of pirate things, such as cannons, Jolly Rodger flags, hand hooks, parrot side-kicks, treasure maps, magnificent galleons and chests of gold. Pirates Island captures with its storyline and makes you play again and again! Try it now and let the adventure start!